Over the last months NTUA has organized several events in its premises at LTCP with a dual objective, firstly to familiarise students with the concept of energy management and secondly to inform various stakeholders about the AMBASSADOR project. 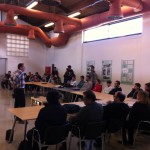 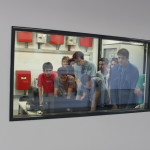 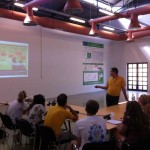 On the occassion of the M30 meeting, the AMBASSADOR team met at the end of May 2015 in the seat of IK4 Tekniker near to Eibar, Spain.

During this two days meeting, AMBASSADOR progress in individual WPs was presented followed by discussions on the demo sites as well as separate face-to-face technical meetings. The participants had also the occasion to visit the amazing building of IK4 Tekniker.

As part of the meeting two interactive workshops dedicated to exploitation and business models were organized and their outputs will bring an added value to already on-going work in these domains. he leading Korean tech-focused daily, Electronic Times ran a special feature article on Smart Cities following the Paris Marathon Press Tour. In the article “Let’s benchmark Lyon region which builds intelligent houses and drives EVs” the energy dilemma, the French energy transition law and SmartGrids France are explained. An important part of the article is also dedicated to the AMBASSADOR project, while citing Alfredo Samperio (project coordinator): “Despite the high energy efficiency of individual buildings, it is important to connect and manage all buildings together in order to generate high profit. By connecting DEMIS and ESS, one can save energy while avoiding inconveniences caused by energy usage limits.”

At the same time the leading economic daily in Korea, Maeil Economic Daily ran a special article about the smart cities and demand response. It also introduced the overview of AMBASSADOR project. Here Alfredo Samperio was also cited: “Even for countries like South Korea where the electricity tariff is simple, smart grid and cities help reduce carbon emission and increase the resilience against the power outage… It’s important to motivate the various buildings and industries to take part in the smart grid/city initiatives.” This article is available here.

AMBASSADOR team actively participated to the 5th Workshop on the Impact of the Energy-efficient Buildings (EeB) PPP that was jointly organised by the European Commission with the support of the Energy Efficient Building Association on 27 and 28 April 2015. The objectives of the Workshop were to address innovation and exploitation issues in running EeB projects and explore potential for cross-project clustering.

The report from the workshop will be shortly available here. On 28 November 2014 the AMBASSADOR project organised a Training for energy managers.

The training was dedicated to topics such as overal energy context, optimization strategies for buildings and districts dimension. The practical demonstration of the District Energy Management and Information System (DEMIS), that is under development within the Framework of the project, was also performed. The feedback from the training will be also used for the preparation of the final project summer school (summer 2016). During this three days meeting, AMBASSADOR progress in individual WPs was presented followed by technical discussions in few dedicated workshops. The participants had also the occasion to visit the CEA-INES testing site and see, where some of the project’s demonstrations will take place in following months.

As every 12 months, the General Assembly members also met together to make some important decisions on the future AMBASSADOR progress as well as upcoming meeting (Eibar in May 2015, Brussels in November 2015).

AMBASSADOR External Advisory Board members also took part in the meeting (Mr Pedersen from CENERGIA and Mr Normand from the City of Grenoble). The overall project progress was presented to them as well as the identified business cases and first results and outputs. The potential contribution of AMBASSADOR to the development of smart districts and smart cities was stressed several times.

On 28 November 2014 (the last day of the meeting), a training for energy managers organised by the AMBASSADOR team took place. The training was dedicated to topics such as overal energy context, optimization strategies for buildings and districts dimension. The practical demonstration of the District Energy Management and Information System (DEMIS), that is under development within the Framework of the project, was also performed. The feedback from the training will be also used for the preparation of the final project summer school (summer 2016). Photos from the training are available in the Gallery.

AMBASSADOR: Digitalization and Analytics for a Smart District

Take 3 minutes to understand how digitalization and analytics contribute to the energy dilemma in the cities….

Schneider Electric recently prepared a short video spot presenting the AMBASSADOR project. AMBASSADOR addresses the question of energy flows management at district level, both for electrical and hot/cold water networks. A system is developed, the DEMIS (District Energy Management and Information System), aiming to define the optimal energy flows answering to a specific objective assigned to the district. The systems and objects that are in the scope of the project are the buildings, the electrical vehicle, the district hot/cold water networks, the local production and storage resources, and the public lighting. AMBASSADOR project representatives contributed to the success of Sustainable Places 2014 conference that took place in Nice, France, on October 1st – 3rd 2014. This conference was jointly organised by RESILIENT and PERFORMER FP7 projects and aimed at covering all the topics of interest in the Energy-efficient Buildings Public-Private Partnerships (EeB PPP): e.g. renewable production, energy storage, construction materials, retrofitting, renewal etc. Besides listening to the newest trends in the EeB domain and recent outputs of EeB projects, AMBASSADOR contributed to three sessions of the conference’s agenda.

Firstly, Emmanuel Onillon from CSEM presented a contribution “District energy flow optimization taking into account building flexibilities” that was prepared in close cooperation between AMBASSADOR and RESILIENT projects and was giving an idea on different approaches towards optimization. The presentation will be soon available here.

Secondly, AMBASSADOR team contributed to the preparation of a workshop Energy positive districts / smart cities and led the session dedicated to different approaches towards development of new business models. The business models session presentation can be downloaded here.

Last but not least AMBASSADOR team met again with colleagues from the RESILIENT project during a joint workshop. This workshop was dedicated to discussion on current and future collaboration as well as proposed joint activities. It was also attended by representatives of E-HUB and FC-DISTRICT projects in order to find possible synergies and points of cooperation.

The overall output of the Sustainable Places 2014 conference is available at the website: http://sustainable-places.eu/past-events/sp2014/. First AMBASSADOR training session is under preparation and scheduled for the second half of November 2014. The training will be organized within AMBASSADOR M24 meeting and will take place in the CEA-INES premises in Chambery, France.

The target group of this one day training will be especially the energy managers. Well educated professionals in this domain are a prerequisite for a successful and effective building and district management. The energy managers will come especially from municipalities but also from industry or research and education organisation.

If you are interested in taking part in the training, please do not hesitate to contact us.

AMBASSADOR in the ECTP conference ECTP-E2BA Conference ‘Construction and Built Environment – Future Horizons‘ took place from 17 to 19 June 2014 in Brussels, Belgium. It was organized by the European Construction Technology Platform (ECTP) jointly with ENCORD (European Network of Construction Companies for Research and Development) and ENBRI (European Network of Building Research Institutes), and with the support of ECCREDI (European Council for Construction Research, Development and Innovation). AMBASSADOR roll-up was presented at the event. More information on the event is available here.